Tiffany’s and their iconic blue box are never far from our thoughts here at Gifty Central. It was interesting to read this bit of history about the blue boxes on the company’s site:

The color known as Tiffany Blue was selected by founder Charles Lewis Tiffany for the cover of Blue Book, Tiffany’s annual collection of exquisitely handcrafted jewels, first published in 1845. Also referred to as robin’s-egg blue or forget-me-not blue, this distinctive color may have been chosen because of the popularity of the turquoise gemstone in 19th-century jewelry. Turquoise was also a favorite of Victorian brides who gave their attendants a dove-shaped brooch of turquoise as a wedding day memento.

Tiffany Blue was later adopted for use on shopping bags, as well as in advertising and other promotional materials. True to the founder’s vision, the Tiffany Blue Box® became an icon of luxury and exclusivity. As The New York Sun reported in 1906,

(Charles Lewis) Tiffany has one thing in stock that you cannot buy of him for as much money as you may offer; he will only give it to you. And that is one of his boxes. The rule of the establishment is ironclad, never to allow a box bearing the name of the firm, to be taken out of the building except with an article which has been sold by them and for which they are responsible.

In the weeks ahead, we’ll be posting more on our favorite finds from this iconic New York store.  But tonight, our mind is on colorful cocktail rings. Or as Tiffany’s calls them, sparklers. 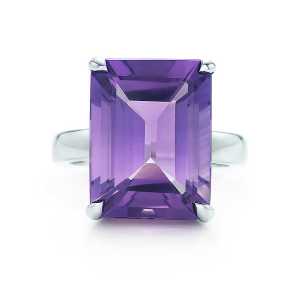 Lately, I’ve been smitten by this sea glass green number. But I can’t tell yet if it’s a crush or a love affair.

The yellow citrine, in 18k gold, is definitely something special. 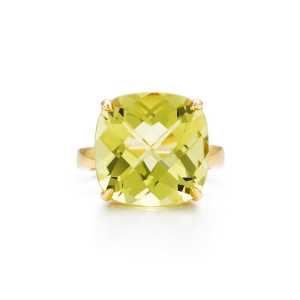 By the way, the illustration on the homepage is by the one and only Ruben Toledo. You can read more about him and his wife, designer Isabel Toledo, here. In the pic below, the divine Isabel hoops while the adoring Ruben looks on: